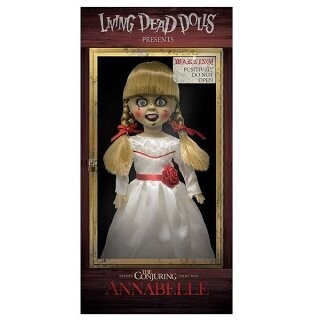 Horror fans first met Annabelle in the sleeper hit The Conjuring. Although she was just a supporting character, she gripped the imaginations of viewers and dug her cold plastic hands into their hearts. Now a she finds herself starring in her own movie and as the newest member of the Living Dead Dolls family! The Living Dead Dolls Presents: Annabelle figure will stand ten inches tall and feature five points of articulation. She wears film accurate clothing and features the same hairstyle as seen in the film. Annabelle, the sinister conduit to the damned, comes complete in a collector friendly window box that may help keep the malevolent entity the cultists conjured contained...then again, it may not.

Save this product for later
Display prices in: CAD